This the story of what happened when 2 intrepid people decided to up stakes and head off in a caravan in what  was to be declared the worst recorded wet and windy winter.

It all started when the house we were renting was sold and we were given notice to be out by January 2nd – not the greatest time of the year to be trying to find another place to rent. We have discovered that not a lot of people are wanting to move straight after Christmas and New Year.
It then meant that we needed to come up with an alternative  and  that was a rather hurried purchase of a caravan, with the view of following the work and move on accordingly. We had been accustomed to camping in times past with our five children but that was only for a few weeks at a time, not for the months we see before us. Our grand plan is to save what we would have spent on rent, council tax, gas and electricity with much lower outgoings, and with our limited space, enough food etc to last us for a week at a time.
So here am I sitting in the caravan with rain pouring down and winds which are strong enough to rock the caravan every which way. Just hope there is enough weight with the dogs and myself to anchor it to the ground.

The house we were renting was sold at the end of October giving us 2 months to find somewhere else. Now, both the Man and his Fan work fulltime and not a lot of people are moving right on Christmas and New Year. To compound things we were having our family including two grandsons (aged 8 & 5 years) coming to visit for Christmas. So as the weeks “hurtled” toward January 2nd (our exit date) we decided that our best option was to “hit the road” and the Man could pick up locum work and the Fan could possibly do some locum work and also start writing.

The adventure starts with rain!

we headed off to a country retreat near Salisbury on a very wet and windy afternoon. Finding the country retreat was a bit of disaster as due to the flooding a lot of the roads were closed. I got lost ( Man and Van did a turn I missed, rescued by elder son and satnav on his phone)…. and in the dark we managed to park the van and erect the awning, then collapse into bed. No matter how uncomfortable it might have seemed originally – it was heaven.

The peace and quiet of the countryside was amazing over the following nights. Hearing the owls and a pheasant who decided that it was very nice to be able to live under the caravan at night. The wonderful clear sky at night to look at the stars. 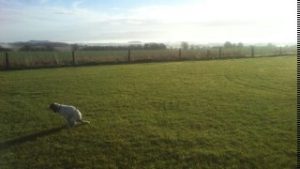 The view from the loo is just great! But little did we know that our peace was to be shattered when on the night of February 4th a terrible storm of 80+ mph winds and horizontal heavy driving rain struck.

See the next post – A Man a Van and a storm

Supplements that Really Do Work !
– based on 25 years of personal experience:
Click to Discover

a van a man and a storm

This site uses Akismet to reduce spam. Learn how your comment data is processed.